The first China International Fair on Trade in Services (CIFTIS) took place from May 28 to June 1, 2012 in Beijing with this theme: “New Vision, New Opportunities and New Development”. The new platform to promote trade in international services – which encompasses areas related to services in commerce, telecommunications, finance, tourism, entertainment, distribution, culture and the environment, among others – was attended by a high-level delegation from Uruguay including the Minister of Foreign Affairs, Luis Almagro, and representatives from 10 companies of the software, consulting and logistics sectors. 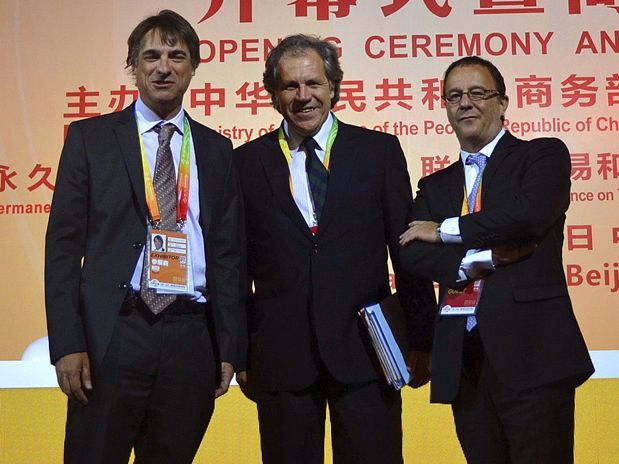 As regards the international trade in services, China's ambassador in Uruguay, Qu Shengwu, when speaking at the presentation made about CIFTIS said that: “At present, the world’s economy has already entered into a stage of services economy. Both industry and trade in services are taking an increasingly important place in economic and social development, and the current volume of the services industry in the overall world economy has reached 70 %”.

In addition, the Chinese Chancellor highlighted the bilateral relationship between China and Uruguay, and the comparative advantages in the trade in services offered by Uruguay.

Besides being "oriental", what do Uruguay and China have in common?

At the presentation of CIFTIS in Uruguay, Nicolás Jodal, Vice President of GeneXus, was invited to share the company’s experience entering the Asian market with the GeneXus technology. In particular, he talked about the obstacles they had to overcome in order to export the software. Mr. Jodal stressed that, in addition to bridging the differences in terms of culture, paradigms and language, offering solutions that were relevant for China or the Asian market in general was imperative.

What would be relevant today for this scenario? According to the entrepreneur, there is great demand for applications for Smart Devices (Smart Phones, tablets and other smart devices), a good example of which could be the competition recently launched by Samsung* (one of the biggest electronics companies in South Korea, offering tablets and phones). When speaking about China in particular, Mr. Jodal said that: “The country is requesting it through various companies that already work with GeneXus or have plans to do so. They are companies of various sizes that want to extend their business to the mobile platform, add-ons or new applications. This demand is real and it’s growing”. He also added that the opportunities for Latin America in relation to service exports were one of the main topics covered at the recent CEO Summit of the Americas.


Opportunities for Uruguay in a highly connected planet

At the International Fair, Nicolás Jodal was invited to offer a presentation about software together with the General Manager for IBM China, among other experts from the academic and business world. The presentation was given on May 30 and encompassed his global vision of the trends in technology, focusing on the challenges posed by the need to provide solutions for mobile devices in a timely manner. In addition, he explained how to achieve this goal by automating processes and without resorting to manual programming.

“Software has changed and influenced all industries” affirmed Mr. Jodal during his presentation at CIFTIS on May 30, and cited Uruguay as an example: “The agricultural sector has always been very conservative, not inclined to adopting new technologies, but it was time we tried to take advantage of the ratio of 3 million people to more than 10 million livestock. Today, every bovine animal is tracked throughout its life with an ear tag, which has made Uruguay the first country in the world to have its entire bovine population identified and registered. In addition, this traceability feature has allowed Uruguay’s meat products to enter the most demanding markets, passing the strictest quality controls”.

Mr. Jodal also presented the example of CEIBAL in a traditional context such as education, and concluded that software is necessary in all industries because it allows doing more with less, faster and more accurately. However, even though software has strongly influenced all the other industries in general, the software industry itself hasn't changed substantially in these last 20 years, “… And that’s what will change with programming automation, using software that writes software and providing the ICT industry with a five-fold increase in productivity and flexibility to make adjustments, an important quality for an industry currently immersed in the revolution brought by smart devices”. 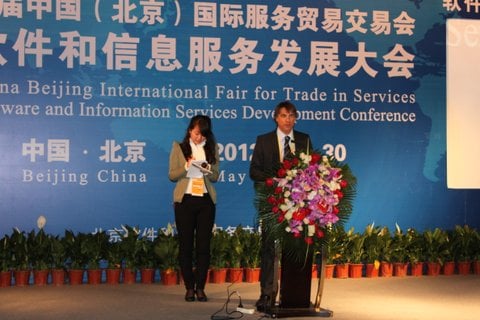 To Mr. Jodal, automation is the only way to go if we want to meet this huge demand. He also added an essential quality for this scenario: being a multi-platform technology. “Because today's software or hardware providers can no longer dictate what clients should use. Quite the contrary, end users are now empowered to choose. And in this scenario, both Android and Blackberry or iOS, which are competing for the leading positions in the market, are completely different from each other and unstable due to changes between versions. What’s more, they change their interfaces and features once or twice a year”. Also, today’s demand for knowledge on new technologies is a worldwide demand and a big opportunity in relation to service exports so we have to be ready, he affirmed. “There’s a new opportunity for much more sophisticated commercial trade and this is favorable to us. In the past, this wasn’t possible because it was very difficult to sell a service without global interconnections. Whether or not we take advantage of this situation is up to us, but I think we're ready and the globalization of the Uruguayan software industry is proof of that”.

GeneXus was one of the 10 companies present at the fair, together with Zhitong (GeneXus distributor in China) with a stand representing Uruguay and the official delegation headed by the Minister of Foreign Affairs, Luis Almagro, accompanied by a group of 20 entrepreneurs from software, consulting and logistics companies.

* At present, Samsung is the 20th largest company in the world in terms of revenue derived from sales of its mobile phones and memory chips.